Magic Happens, look for it. 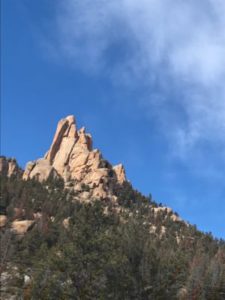 I find magic is hiding in places just waiting to be found. All you need to do is open your awareness and affirm you can have it. I was in a great space after driving back from a quick trip into the mountains for the purpose of celebrating the solstice. The sky was clear, the road had almost no cars to avoid, and the river was charming with its sculptures of ice. (click to see the solstice in the Rockies   IMG_7364 )  It was when we arrived back home that a magical gift was handed to me.

Three days ago I lost one of my antlers from my car. It still had one antler and a red nose, so I figured I would finish out the holiday season with just one antler displayed. I parked and as I walked to the back of my car a woman approached me who had just parked behind me. To my surprise she had an antler in her hand. She began to tell me her story of how she too lost an antler a few days ago and then purchased new antlers. Now she had three. In mid sentence she stopped and exclaimed, “I know you.”

Her name was Mary, how apropos. We have met many times while visiting our mutual friend Diane. Three days before Christmas appeared Mary, my Christmas angel. Mary was watching for cars that only had one antler and then she figured she would share the third antler with them. How kind. By being present with the enchantment of Christmas, Mary and I both connected gifting each other  with the magic we were embodying. How delightful it was to see her sweet face once again.

Life is MAGIC! Look for it my friends; it is out there.

May the Light of the season shine on you now and throughout the new year.